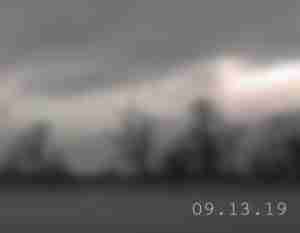 It was well over one year ago that the nearly-finalized cover art for an upcoming EP of creepy musical tales entitled Eventide made its way onto social media. The tracks had all been recorded, preliminary mixes were underway, and then – true to the nature of the spirits on which its stories were based – it simply vanished. Following what singer/songwriter Gavin Goszka describes as a “very overdue back-to-school session” in audio engineering, Eventide is now poised to make it’s debut, and the timing couldn’t be more fitting: Friday the 13th, just as the full moon is set to rise.

From phantom hitchhikers to spectral beasts that haunt the desolate moors of England, the EPs four non-instrumental tracks take the listener on a musical journey steeped in shadowy legend. Those who may have heard earlier versions of these songs as part of Gavin’s “Project: Archives” series are in for something new as well, not only in the form of a freshly-composed fifth instrumental track, but also updated arrangements.

“One of the biggest challenges of this recording proved to be choosing a project name to release it under.” Gavin explains. “I’ve already got two other musical projects – Parlormuse and Subtle Inversion – outside of Midnight Syndicate, and neither of them seemed to be a good fit at first. Parlormuse is completely focused on interpreting authentic Victorian music, and Subtle Inversion featured Megurine Luka on vocals, so I thought I would simply use my own name, rather than try to find yet another name to bill it under.”

Despite that initial decision, something didn’t quite sit right. Gavin began to reconsider the possibility of rebranding Subtle Inversion to incorporate all of his solo writing, especially since there were no plans of recording a follow-up to the project’s only release, 2010’s Kaleidoscope. “I had occasionally toyed with the idea of doing another release over the years, but for one reason or another, the pieces just never fell into place. I kept thinking about how much that name could work – how the music on Kaleidoscope wasn’t worlds apart from a lot of my unreleased solo material – and the more I thought about it, the more it just seemed to make sense.”

Fans of Megurine Luka can rest assured: the beloved vocaloid isn’t being exiled from the project. “I have a feeling she’ll turn up again at some point, in some capacity. We’ll just have to see how this plays out.”

In the meanwhile, Eventide will be available for preview at http://gavingoszka.com beginning on Friday, September 13th, 2019, as well as at https://www.telesmaticentertainment.com, where it will also be available for purchase in digital download format.

2 thoughts on “Eventide Emerges Under An Unexpected Moniker”