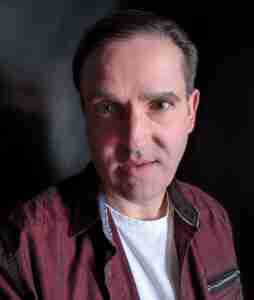 Gavin Goszka has been involved with music in one form or another since age seven. His formal training began on a classic Hammond organ, which also marked his first ventures into the world of public performance. He began studying percussion during high school and continued this training into college, where he also learned voice and piano during his tenure at Baldwin-Wallace University’s renowned Conservatory of Music.

Gavin began writing and recording his own songs at age 17, primarily inspired by the lush sonic landscapes of New Age artists like Vangelis and Tangerine Dream, but also drawing heavily on his love of traditional Irish music. In 1988, he began writing original vocal music that blended traditional pop and rock fare with more progressive influences. One of his instrumental compositions, “The Journey Begins,” won Honorable Mention in a 1988 national songwriter’s competition.

The 1990s found Gavin moving away from the New Age leanings of his earlier work and exploring a wide range of musical projects and genres. This period included tenures with the dance-pop outfits SuburbanBoys and twoSIDES, a brief outing as a solo performer in local coffee houses, and the start of his continuing involvement as one half of the gothic orchestral duo Midnight Syndicate. As a work-for-hire artist and performer, he composed original music for in-house use at Digital Equipment Corporation and served as the drummer for contemporary Christian outfit Gabriel’s Harp, whose live performances included a hockey arena in Edmonton, Canada.

In 2007, Gavin decided to parlay his fascination with Victorian-era popular music into Parlormuse, a project that puts a modern spin on authentic late 19th and early 20th century music. 2010 saw him working alongside Japanese vocaloid sensation Megurine Luka as part of Subtle Inversion, a project that blends the energetic electronic leanings of J-Pop with American pop and rock stylings.

With 2017 marking his 30th anniversary as a songwriter, Gavin began releasing a vast catalog of previously-unheard music under the heading of Project: Archives. Focusing on early instrumental works, the project had originally been intended to include vocal songs as well, but in 2019 the decision was made to re-record this material under the Subtle Inversion moniker, which would transition from being a vocaloid-centered project to more of a general solo outlet. Eventide, an EP-length collection of the project’s first new material in over nine years, was released in October of 2019.

The onset of the coronavirus pandemic in early 2020 found many musical projects being put on hold, but Gavin returned to the world of Victorian music once more in August of that year to record the first of two seasonally-themed EPs for Parlormuse. A second full-length album quickly followed in October, along with Gavin’s first ever livestreamed concert event in November.